Valley of the Shadow Project retrospective on the Civil War

Last week at the American Historical Association meeting, my friends and colleagues from the Valley of the Shadow Project met for a panel discussion on the state of the field of digital history and a retrospective of the Valley’s Civil War project after 20 years. The gathering was a wonderful experience and the discussion exciting and interesting. One participant, a librarian at the Library of Congress, said about the Valley Project that “there may not be anything like it again.” I agree. The panel included: Edward L. Ayers, Anne S. Rubin, Amy Murrell Taylor, Andrew Torget, Scott Nesbit, and me.

Here are some of the highlights of that discussion. Amy Murrell Taylor’s advice to historians, “Think Big! the Valley taught me to to think big.” Marvelous and so true. She talked about how the project emphasized “connections” among individuals that we could not see otherwise and that are difficult to see, those of families and relationships among families. As Amy explained, in the project the life of the individual in history became more visible; despite the complexity of history and the scale of the Civil War, the Valley project approach managed to create an environment in which the individual always emerged somehow for its readers. She talked about we can see these individuals in multiple dimensions and “rebuild” or “reconstitute” their lives and experiences. This is powerful history, full of complexity, agency, and contingency not easily pulled off in narrative form.

Andrew Torget explained that when he came on as project manager, the Valley project was an “enterprise” with teams of students and historians working on different aspects of the project. To him the central lesson of the Valley project experience was that it demonstrated the “power of collaboration.” Students working with faculty and technologists and librarians created an intense and powerful model of scholarship in action. Dozens and dozens worked on the project over the years, with care, purpose, and dedication both remarkable and inspiring.

Scott Nesbit described how the Valley taught him “the virtue of openness” and at the same time “the virtue of parasitism.” Here, he explained how the Valley shared and freely disseminated its work and how it also borrowed heavily on technologies and data in the open source environment. Anne Rubin noted that the Valley taught her the value of audience, of opening history to a wider audience and how important it is for historians to connect with, understand, and talk to the public broadly. Again and again, these lessons shape our work in digital history. 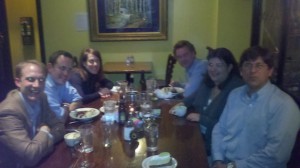