With Georgia Teachers at Manassas Battlefield

This past weekend I joined the Gilder Lehrman Institute Teaching American History Grant on the Civil War for Paulding County Public Schools. Gary Gallagher and Matthew Pinsker were the other faculty. This was a terrific group of teachers and an inspiring group of teachers. They are dedicated to teaching and passionate about learning.

We met first at the Virginia Theological Seminary in Alexandria, Virginia. This historic place sits on the ridge line on which the Union Army built a series of forts to guard Washington, D.C. The Seminary Ridge commands an impressive view of the Potomac River, the Capitol Building, Washington, D.C., and the port city of Alexandria. 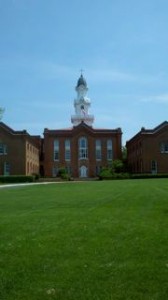 We met in Aspinwall Hall, a building erected in 1859 and one of the tallest structures on the ridge at that time. The site is not far from Fort Worth.

Then we went on to tour Manassas National Battlefield. Hot and humid, the conditions were much like they were 151 years ago. Despite the heat and humidity, the Blue Ridge mountains were clearly visible to the west and the various gaps through them visible in relief against the horizon line from both Matthew’s Hill and Henry House Hill.

Later, in the afternoon we examined in detail the Valley of the Shadow digital history project and used it to uncover how Northerners and Southerners may have experienced the battle. Because the NPS had no internet service at the headquarters, a rather unexpected development, we had to make do with our cell phones. And so, we broke up into small groups, huddled around phones, and used the mobile version of the Valley project. It worked beautifully. And the discussion was even more lively than it would have been otherwise, it seems. I may try this in the classroom with my undergraduates! 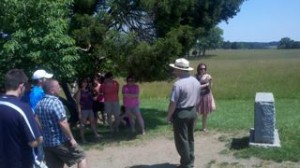